I forgot to link to Mizuno’s schedule of events for their mobile running lab. Here it is: http://bit.ly/dd8ZqV

Thanks to a tweet from @SportsBasement, I found out Mizuno (the sports/shoe company) was setting up a mobile running lab / shoe truck in the Sports Basement (Presidio) parking lot on Saturday. After a morning swim at the Presidio YMCA, I stopped by.  Their friendly staff went through my motion analysis and fitting.  I’ve had IT band issues for some time now, so I wasn’t expecting much except some possible gait analysis or tips for dealing with over-pronation.

First step (ha!) was to get onto their scanner, essentially a flatbed scanner for the feet.  The feet are cloaked to create some kind of light seal and the scanner reads the soles of the feet.  The result is a computerized image of the feet with shading to indicate points of contact and the amount of arch.  Naturally other statistics are available such as shoe size and foot dimensions.  I already knew I have wide feet, but I didn’t know my left foot is about 1.5 cm wider than my right, and about a ½ cm longer.

The setup also has a video camera (perhaps a webcam) to analyze static and dynamic joint alignment, ankle flexibility, and foot rotation.  Pretty cool; I’ve had a doctor record my stride on video but I’d never used a tool to analyze the video results, and although this setup didn’t perform a complete gait analysis, we found my leg internally rotates in mid-stance, causing force between the tibial plateau and femoral condyle of the knee.  I have no idea what that means.  But it does seem it could be related to IT band issues, and I never had this information until now.

Naturally, Mizuno’s truck is designed to sell shoes.  So based on the computer analysis I was fitted for two recommended Mizuno shoes, the Wave Inspire and the Wave Nirvana.  I’d never even tested Mizuno shoes before; for running I’ve always used Asics, simply based on a years-ago doctor recommendation.  I took the Wave Nirvana shoes out for a quick trot around the Sports Basement parking lot and felt absolutely no discomfort.  I haven’t been running for some time but I usually expect some hesitation in the leg or knee while running, since I haven’t completely healed yet.  With the Nirvana shoes I felt none of that.  The Wave Inspire shoes were similar, but I didn’t feel as confident in them.  Both are support shoes, but they are not motion-control shoes.  According to the analysis report I have slight over-pronation.  My current shoes, Asics Foundation (VII?) are a motion-control type and it’s possible they were over-correcting or overly stiff for my level of pronation.

Then the Mizuno folks asked if I wanted to take the shoes on a longer run – sweet!  I took them briefly over to the bike/walking path parallel to Sports Basement and ran for a few minutes.  Again, I felt no discomfort at all.  It was strange at first, and then I held a moderate pace for just a minute or so.  I forgot how much I missed running at pace for extended times.  Though I’ve been swimming and biking, and I’m still pretty novice at those, I just don’t think they can replace the simplicity and direct activity I get with running.  The repetitiveness, the necessary control of breathing, the pounding of feet, and the simplicity of having nothing else but the body to propel forward are just part of the appeal.  I’m sure those are the very reasons why others may find running tedious, monotonous, and boring.

In the end, I just might end up getting a pair of Mizuno shoes.  They felt so comfortable, and my stride felt so confident, I think they’re worth a shot.  I haven’t checked the price, but I’m sure Sports Basement will have a good deal.  Also during the running lab, I found out about the Presidio Sports and Medicine clinic.  I didn’t know about it, and they deal with IT band issues all the time.  Bonus!  I’ll probably check them out since I haven’t had much luck with podiatrists and other doctors. 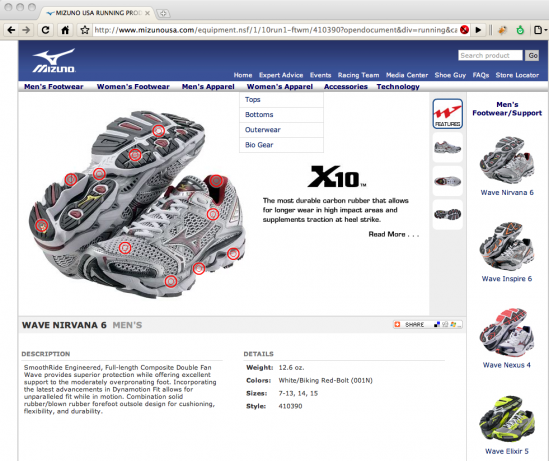